Nestled between Elim and Cape Agulhas, and just 9km from the sea, lies the secluded Strandveld Vineyards.

This wind-swept winery derives its name from the belt of land which spans the tempestuous tip of Africa’s southernmost coastline. At almost 35 degrees below the equator, this part of our fair Cape is characterised by severe winds, billowing mist and below average temperatures. A unique combination of maritime climate, alternating sites and diverse soil types work together to create the terroir which distinguishes the wines of Strandveld Vineyards. 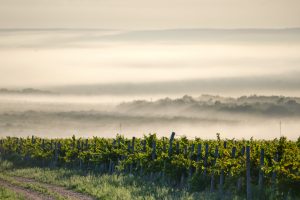 It was in 1488 that Bartholomeu Diaz and his team of Portuguese sailors first laid eyes on this corner of the continent. Centuries later similarly intrepid explorers, in their infinite wisdom, realised the potential such a richness of environment could produce. Inspired by these individuals, it was in 2001 that a group of enthusiastic wine lovers turned to the original navigation maps to seek out potential new vineyard sites equally undeterred by the fierce storms and blustering gales that now give rise to the characteristic grapes and consequentially distinctive Strandveld Vineyards wines.