The Story of Adamastor-the untamed Titan

Adamastor, the untamed Titan, mythological god of wind and storms and tormentor of the early Portuguese explorers perfectly personifies the extreme weather and harsh growing conditions our vines endure and the history of the treacherous Strandveld coastal area and its many shipwrecks so well.

The name Adamastor is an adaptation for the Portuguese language from the Greek word for “Untamed” or “Untameable” (Adamastos).

The Story of Adamastor, the Untamed Titan

Once upon a time, so long ago that not even the Greek gods had been born – or so the sages tell us – the Earth and the Sky gave birth to twelve Titans. These were fierce and violent creatures, with bodies as big as mountains and monstrous features. They could demolish forests by shaking the Earth and drown islands with gargantuan waves. And out of sheer cruelty they laid waste to the planet for sport.

One of the Titans, Cronos (Time) had several children with his wife Rhea. These were the Greek gods – among them, Zeus, Hades, Demeter and Poseidon. For ten years, Zeus and his siblings fought against the Titans and in the end, with the help of the one-eyed Cyclops, the Titans were defeated. Most of the Titans were sent to Tartarus, a fiery underground prison, but some met different fates. Atlas was sent to North Africa, where he would hold up the sky on his shoulders. Helios, who had not participated in the war, drove the chariot that pulled the Sun around the Earth.

One of the Titans was called Adamastor. He had fallen in love with a nymph, Thetis, as punishment for coveting the nymph and for his rebellion against the gods, Adamastor was turned into a jagged mountain at the southernmost tip of Africa.

Scourge of the Portuguese sailors

For millennia, Adamastor broods upon his fate beneath the earth, embittered by his exile. His beard becomes the fynbos of the Cape, his skin as rough as the sandstone outcrops, his mouth like a granite cavern on the rugged coast. 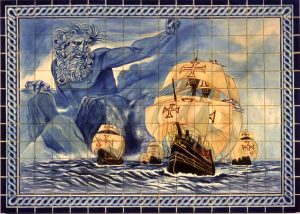 One day, he sees a Portuguese sailing ship rounding the Cape. This is none other than Vasco da Gama, the explorer who opened up a trade route to India around the tip of Africa (his predecessor Dias had not completed the journey).

“… an immense shape
Materialised in the night air,
Grotesque and enormous stature
With heavy jowls, and an unkempt beard
Scowling from shrunken, hollow eyes
Its complexion earthy and pale,
Its hair grizzled and matted with clay,
Its mouth coal black, teeth yellow with decay.” 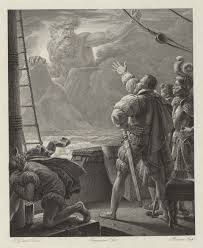 Punished by the Greek gods who defeated the Titans and jealous of the freedom and exploration of the Portuguese seafarers, Adamastor vows to torment every ship that sails past him. He claims responsibility for the deaths of Bartolomeu Dias (who sank off the coast of Table Bay on a return voyage) and other prominent Portuguese seafarers.

“I am that vast, secret promontory,” Adamastor tells Da Gama, “you Portuguese call the Cape of Storms.”

A statue of Adamastor created by Julio Vaz Jr. in 1927, can be found in Lisbon, Portugal. The statue shows a ferocious Adamastor emerging from a rock while a smaller brass human looks on in terror.