The story of Anders Sparrman

The story of Anders Sparrman

Anders Sparrman was a Swedish physician, naturalist, explorer-adventurer, passionate abolitionist and author.  Trained as a medical doctor at Uppsala University in Sweden, Sparrman became the last and youngest
disciple of famous naturalist Carl Linnaeus and sailed for the Cape of Good Hope in January 1772 to take up a post as a tutor. 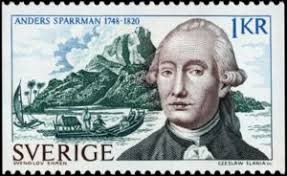 Sparrman had arrived in the Cape ostensibly as a tutor but in the same year, he joined Johann Reinhold Forster, as assistant naturalist, aboard Capt. James Cook’s ship Resolution for the circumnavigation of the Antarctic Circle. Captain Cook offered Sparrman a free passage as naturalist on his ship while in Cape Town in November 1772. They travelled to Tahiti, New Zealand, the Antarctic, Terra del Fuego and South Georgia, returning to Cape Town after two years.

Sparrman returned to the Cape in March 1775 and began his Southern African journey into uncharted territory. Riding overland from the Cape in July 1775. Sparrman reached the Great Fish River near Cookhouse – the farthest point of his journey – and returned to Cape Town in April 1776.  This was the most eastern boundary of the Cape. So, in a curious way Dias and Sparrman are parallel travellers, both having reached the Great Fish River, Sparrman by the overland route and Dias by sea. Sparrman’s extensive and hazardous journeys into the interior more than 240 years ago are still very relevant to students of natural history today.

Carte Géographique: DU CAP DE BONNE ESPÉRANCE
Anders Sparrman’s map, first published in 1779, was the first map which attempted to show a detailed record of most of the area of the settlement, which extended about 800km to the east of Cape Town and 450km to the north. He made no claim of being a competent cartographer – his primary interest was natural history – nevertheless, the map was a significant advance despite it been being “laid down only from my own observations with a compass, and the accounts obtained from others” and having no longitude scale. 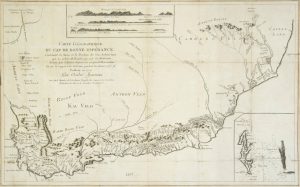 Sparrman’s coastal outline is an improvement on previous maps, although it is distorted in the north-east partly because the southern coast’s inflection to the north-east occurs at Plettenberg Bay (Sparrman’s Bay Contant); this is 200km too far to the west (of Algoa Bay). However, the inset of False Bay, Sparrman corrects the misshapen
bay in Lacaille’s map (map # 6). Sparrman introduced 244 new place names and more than half are still used today.

Sparrman: A Voyage to the Cape of Good Hope

An astute observer, he published, in 1783, the first accurate account of the interior of South Africa as it was then known. Sparrman left some very trenchant observations on how the colonists were transforming the landscape through agriculture, veld burning and the over-exploitation of game.   His travels were published in three volumes with English, French, Dutch and German translations following.  His accounts include the first complete descriptions of the hippopotamus, rhinoceros, wildebeest, buffalo and impala.  His writings also yield interesting records of smaller mammals such as the honey badger and warthog.  Sparrman was also a zestful and endlessly nitpicky botanist.  Among the plants mentioned in his writings are silvertrees, proteas, ericas and arum lilies.  He was also the first person to describe the Cape Ash.

Sparrman’s book has been considered by Cape historians as one of the most trustworthy descriptions of the colony and its people.
“..the African colonists ought to take it into serious consideration, whether by extirpating the game, they are not in reality laying waste their country, and rendering it a desert”

And on agricultural land transformation he said this:

“with respect to the effects of the industry of man as to the more immediate operations of nature ,it is not at all unlikely, that future ages may see this part of Africa entirely changed and different from what it is at present”

The spirit of Anders Sparrman lives on in the strandveld today.

It was with a similar sense of adventure and the unknown that the owners of Strandveld Vineyards purchased an old wheat and sheep farm close to the southern tip of Africa in an area as yet unchartered for vineyard growing and winemaking and undaunted by the barren terrain, maritime climate and relentless winds embarked on their own journey of discovery.

Interestingly, Sparrman clearly enjoyed Cape wine, surely a good enough reason to have his name on a bottle. He described Constantia as “a very racy and delicate desert wine… peculiarly agreeable”.